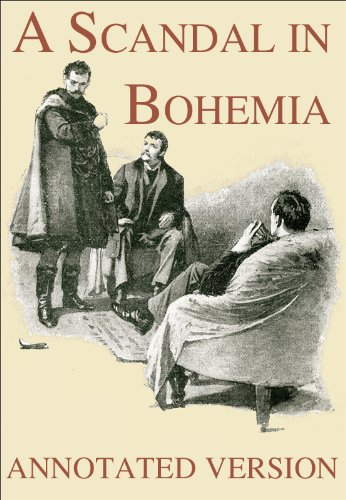 Might I trouble you for a match? He held out his hand, and I saw in the light of the lamp that two of his knuckles were burst and bleeding. Is Mrs. Watson in? You are alone? It's all the same to me. It was not Holmes's nature to take an aimless holiday, and something about his pale, worn face told me that his nerves were at their highest tension.

He saw the question in my eyes, and, putting his finger-tips together and his elbows upon his knees, he explained the situation. That's what puts him on a pinnacle in the records of crime. I tell you Watson, in all seriousness, that if I could beat that man, if I could free society of him, I should feel that my own career had reached its summit, and I should be prepared to turn to some more placid line in life.

Between ourselves, the recent cases in which I have been of assistance to the royal family of Scandinavia, and to the French republic, have left me in such a position that I could continue to live in the quiet fashion which is most congenial to me, and to concentrate my attention upon my chemical researches. But I could not rest. Watson, I could not sit quiet in my chair, if I thought that such a man as Professor Moriarty were walking the streets of London unchallenged.

He is a man of good birth and excellent education. At the age of twentyone he wrote a treatise upon the binomial theorem, which has had a European vogue. On the strength of it he won the mathematical chair at one of our smaller universities, and had, to all appearances, a most brilliant career before him. But the man had hereditary tendencies of the most diabolical kind. A criminal strain ran in his blood, which, instead of being modified, was increased and rendered infinitely more dangerous by his extraordinary mental powers. Dark rumours gathered round him in the university town, and eventually he was compelled to resign his chair and to come down to London, where he set up as an army coach.

So much is known to the world, but what I am telling you now is what I have myself discovered. For years past I have continually been conscious of some power behind the malefactor, some deep organizing power which forever stands in the way of the law, and throws its shield over the wrong-doer. Again and again in cases of the most varying sorts -- forgery cases, robberies, murders -- I have felt the presence of this force, and I have deduced its action in many of those undiscovered crimes in which I have not been personally consulted.

For years I have endeavoured to break through the veil which shrouded it, and at last the time came when l seized my thread and followed it, until it led me. He is the organizer of half that is evil and of nearly all that is undetected in this great city.

He is a genius, a philosopher, an abstract thinker. He has a brain of the first order. He sits motionless, like a spider in the centre of its web, but that web has a thousand radiations, and he knows well every quiver of each of them. He does little himself. He only plans. But his agents are numerous and splendidly organized. Is there a crime to be done, a paper to be abstracted, we will say, a house to be rifled, a man to be removed — the word is passed to the professor, the matter is organized and carried out.

The agent may be caught. In that case money is found for his bail or his defence. But the central power which uses the agent is never caught -- never so much as suspected. This was the organization which I deduced, Watson, and which I devoted my whole energy to exposing and breaking up. You know my powers, my dear Watson, and yet at the end of three months I was forced to confess that I had at last met an antagonist who was my intellectual equal.

My horror at his crimes was lost in my admiration at his skill. But at last he made a trip -- only a little, little trip but it was more than he could afford, when I was so close upon him. I had my chance, and, starting from that point, I have woven my net round him until now it is all ready to close.

In three days -- that is to say, on Monday next — matters will be ripe, and the professor, with all the principal members of his gang, will be in the hands of the police. Then will come the greatest criminal trial of the century, the clearing up of over forty mysteries, and the rope for all of them; but if we move at all prematurely, you understand, they may slip out of our hands even at the last moment.

But he was too wily for that. He saw every step which I took to draw my toils round him. Again and again he strove to break away, but I as often headed him off. I tell you, my friend, that if a detailed account of that silent contest could be written, it would take its place as the most brilliant bit of thrust-and-parry work in the history of detection. Never have I risen to such a height, and never have I been so hard pressed by an opponent. He cut deep, and yet I just undercut him.

This morning the last steps were taken, and three days only were wanted to complete the business. I was sitting in my room thinking the matter over when the door opened and Professor Moriarty stood before me. His appearance was quite familiar to me. He is extremely tall and thin, his forehead domes out in a white curve, and his two eyes are deeply sunken in his head.

He is clean-shaven, pale, and asceticlooking, retaining something of the professor in his features. His shoulders are rounded from much study, and his face protrudes forward and is forever slowly oscillating from side to side in a curiously reptilian fashion. He peered at me with great curiosity in his puckered eyes. The only conceivable escape for him lay in silencing my tongue. In an instant I had slipped the revolver from the drawer into my pocket and was covering him through the cloth.

At his remark I drew the weapon out and laid it cocked upon the table.

He still smiled and blinked, but there was something about his eyes which made me feel very glad that I had it there. Pray take a chair. I can spare you five minutes if you have anything to say. But he merely drew out a memorandum-book in which he had scribbled some dates. The situation is becoming an impossible one. Holmes,' said he, swaying his face about. It is necessary that you should withdraw. You have worked things in such a fashion that we have only one resource left. It has been an intellectual treat to me to see the way in which you have grappled with this affair, and I say, unaffectedly, that it would be a grief to me to be forced to take any extreme measure.

You smile, sir, but I assure you that it really would. You stand in the way not merely of an individual but of a mighty organization, the full extent of which you, with all your cleverness, have been unable to realize. You must stand clear, Mr. Holmes, or be trodden under foot. I know every move of your game. You can do nothing before Monday. It has been a duel between you and me, Mr. You hope to place me in the dock. I tell you that I will never stand in the dock.

You hope to beat me. I tell you that you will never beat me. If you are clever enough to bring destruction upon me, rest assured that I shall do as much to you. Moriarty,' said I. I confess that it left an unpleasant effect upon my mind. His soft, precise fashion of speech leaves a conviction of sincerity which a mere bully could not produce.

Of course, you will say: 'Why not take police precautions against him? I have the best of proofs that it would be so. I went out about midday to transact some business in Oxford Street. As I passed the corner which leads from Bentinck Street on to the Welbeck Street crossing a two-horse van furiously driven whizzed round and was on me like a flash.

I sprang for the foot-path and saved myself by the fraction of a second. The van dashed round by Marylebone Lane and was gone in an instant.

river-forest.jp/wp-content/10.php I kept to the pavement after that, Watson, but as I walked down Vere Street a brick came down from the roof of one of the houses and was shattered to fragments at my feet. I called the police and had the place examined. There were slates and bricks piled up on the roof preparatory to some repairs, and they would have me believe that the wind had toppled over one of these. Of course I knew better, but I could prove nothing.


I took a cab after that and reached my brother's rooms in Pall Mall, where I spent the day. Now I have come round to you, and on my way I was attacked by a rough with a bludgeon. I knocked him down, and the police have him in custody; but I can tell you with the most absolute confidence that no possible connection will ever be traced between the gentleman upon whose front teeth I have barked my knuckles and the retiring mathematical coach, who is, I daresay, working out problems upon a black-board ten miles away. You will not wonder, Watson, that my first act on entering your rooms was to close your shutters, and that I have been compelled to ask your permission to leave the house by some less conspicuous exit than the front door.

I have my plans laid, and all will be well. Matters have gone so far now that they can move without my help as far as the arrest goes, though my presence is necessary for a conviction. It is obvious, therefore, that I cannot do better than get away for the few days which remain before the police are at liberty to act.